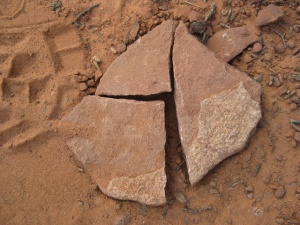 One of my trails that I take my person on a lot doesn’t have a name. That’s because it’s not an official trail.

As far as I’m concerned it’s official, but it’s kind of nice because it’s almost private.

But I’ve been thinking, that trail really needs a name.

My person must have been thinking the same thing because today we found a broken rock on the trail and she thought Broken Rock Trail would be a good name.

She even tried to get me to pose by the rock to make it official.

I’ve got to think of another name quick. Broken Rock sounds so stupid. I mean, somebody accidentally stepped on that rock and broke it and now it’s going to be the name of my trail?

I don’t think so.

I thought and thought – as much as a dog brain can think – and finally I came up with it.

Here it is! The official name for my trail.

Good Sniffs Trail it is.

I bet all the dogs will want to visit it now.

30 responses to “Name that Trail”