RSS
← Got Boots?
Praying for Fish → 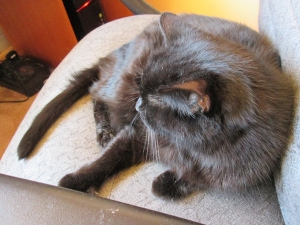 The other day I told you about my new computer that my person said she got for her camera.

I was pretty upset that a camera that doesn’t even have a blog would get a computer before I would.

But now I’ve learned that that camera has some competition for the computer.

You see, for a long time now my person has just had a laptop and she didn’t use it at the computer desk.

So the chair at the computer desk has been sitting empty.

Or at least it was sitting empty until Scratchy decided to take it over.

That’s been Scratchy’s chair for a long time.

And it really must be his chair because when my person tries to squeeze in next to Scratchy on the couch he moves.

So she figured he’d move when she sat down on the edge of the computer chair while Scratchy was in it.

He stayed on that chair like it was his.

So I guess Scratchy figured that since a computer got put on the desk where his chair is, the computer must be his.

It serves that camera right.

But Scratchy had better not get any ideas about taking over my blog.

← Got Boots?
Praying for Fish →

19 responses to “Keeping the Chair”