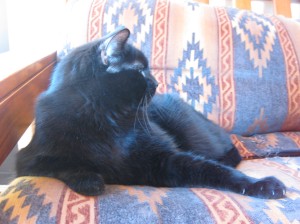 I live with a big, black cat named Scratchy. Well, he’s big for a cat but not nearly as big as me. Scratchy gets special treatment that I don’t get and I get really jealous. Sometimes Scratchy gets on the bed and my person lets him stay there and even scratches his head. I’m not allowed on the bed – at least when anybody’s looking. Scratchy’s allowed to sit by my person on the couch too. If I get on the couch I get yelled at.

Most of the time Scratchy gets away with anything he wants, but every once in awhile he gets yelled at for something. When Scratchy gets yelled at I go try to help my person take care of the problem. If Scratchy’s on the counter I jump up and try to get him. If he’s in the bathroom trying to get the frog (the frog is locked in the bathroom so Scratchy can’t get him) I’ll come and block Scratchy’s escape path.

The funny thing is that every time Scratchy gets yelled at and I show up to help, I get yelled at. I just don’t get it.

← Caught on the Fence
Frisbee Dog →