Day 5 – The Dog Hotel and the Imaginary Dog 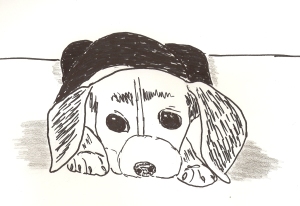 I’m stuck at the dog hotel this week and haven’t been able to have any adventures, so I’m making one up about an imaginary dog. I started doing this on Monday, so if you want to get the story from the beginning you can go back to the March 11th post and start from there.

Eric usually enjoyed church, but this morning he wasn’t focused. He mouthed the words to the songs and couldn’t remember later what songs were sung. The Scripture reading was from Matthew 6, where Jesus tells us not to worry. When the reader read verse 26 “Look at the birds of the air; they do not sow or reap or store away in barns, and yet your heavenly Father feeds them. Are you not much more valuable than they?” all Eric could think about was the puppy. The puppy that could be put down any minute while Eric sat in church. Does God take care of puppies? Why was that puppy alone in the snow in the first place?

Dad had to tap Eric on the shoulder when it was time to leave. What happened to the time? Eric thought. Did the pastor finish his sermon already? The puppy had been the only thing on his mind.

At lunch Eric spent more time moving food around his plate than he did eating any of it?

“Eric, “Dad said, “the puppy will get plenty of food when we bring him home tomorrow. Eat yours now.”

“Dad, what if he’s not there anymore?”

“Come on, Dad. We’ve got to get going,” Eric said as he rushed out the door.

“Eric, if we leave now we’ll be waiting for half an hour for their doors to open.”

After what seemed like forever to Eric, he and his dad were on their way. When they arrived in the shelter’s parking lot Eric jumped out of the truck and ran to the door.

Tears filled Eric’s eyes as his dad caught up with him.

The rattle of the lock could be heard from the opposite side of the door and then it opened. Eric stepped in.

The woman behind the counter met him with an emotionless stare.

“Your puppy?” the woman asked.

“We dropped him off here on Saturday and we’ve decided to keep him,” said Eric.

The woman checked the computer. After what seemed like forever to Eric the woman said, “there were three puppies dropped here on Saturday. What did he look like?”

“He was part beagle. Brown and white. About this big,” Eric said as he held out his hands.

The woman stared at the computer screen. “I don’t see any puppies fitting that description here. We don’t have him.”

“You can go look if you like,” the woman said.

The woman led Eric and his dad to the back where the dogs were kept. “Take as long as you want. Maybe you’ll find another dog to take home with you. I’ll be up front when you’re ready to go.”

Eric could not stand the thought of another dog. He wanted his puppy. He and his dad walked past cages and cages of dogs, all of them barking as they walked by.

The puppy wasn’t there.

To be continued tomorrow.