RSS
← Packing up the Cats
Mischief in my Kennel →

It’s Not Over Yet 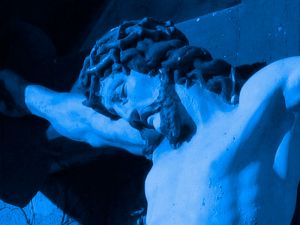 Photo taken by Kabir Bakie at the Cincinnati Zoo

Hey person, I’ve been worried all week about what’s going to happen to Jesus.

You ended the story too soon.

They arrested Him, but I don’t know what happened after that.

He didn’t do anything wrong.

They let Him go, didn’t they?

Those garbaldy goo good for nothing people that arrested Him. I’ll give them what for.

Jesus was put on trial and even though Pilate, the Roman governor, didn’t find anything he’d done wrong the Jews wanted Him crucified.

So Pilate finally agreed and sent Jesus to be crucified.

I’m giving Pilate what for too!

Two other men, both criminals, were also led out with Jesus to be executed.

When they came to the place called the Skull, there they crucified Him, along with the criminals – one on His right, the other on His left. Jesus said, “Father, forgive them, for they do not know what they are doing.”

I don’t get it. They just nailed Jesus to a cross and He wants to forgive them?

I’m gonna give them all what for.

And they divided up Jesus’ clothes by casting lots.

It’s too bad I don’t wear clothes, or I’d give Him some of mine.

The people stood watching, and the rulers even sneered at Him. They said, “He saved others; let Him save Himself if He is the Christ of God, the Chosen One.”

Those rulers better watch it. If Jesus doesn’t give them what for I sure will.

The soldiers also came up and mocked Him. They offered him wine vinegar and said “If you are the king of the Jews, save yourself.”

There was a written notice above Him, which read: THIS IS THE KING OF THE JEWS.

How come those people don’t believe what they’re reading?

They should be worshipping The King of the Jews.

One of the criminals who hung there hurled insults at Him: “Aren’t you the Christ? Save yourself and us!”

But the other criminal rebuked him. “Don’t you fear God,” he said, “since you are under the same sentence? We are punished justly, for we are getting what our deeds deserve. But this man has done nothing wrong.

I don’t get it. The only man who is making any sense is hanging on a cross along with Jesus.

Then the man said, “Jesus, remember me when you come into your kingdom.”

Jesus answered him, “I tell you the truth, today you will be with me in paradise.”

I bet that upset all the people who were giving Jesus a bad time.

It was now about the sixth hour, and darkness came over the whole land until the ninth hour, for the sun stopped shining.

That was what time?

The middle of the day?

And the curtain of the temple was torn in two. Jesus called out with a loud voice, “Father, into your hands I commit my spirit.” When He had said this He breathed His last.

That’s not how the story’s supposed to end.

It doesn’t end there?

The centurion, seeing what had happened, praised God and said, “Surely this was a righteous man.”

What do you mean, I have to wait till next Sunday to hear the rest of the story?

This is gonna be a long week.

← Packing up the Cats
Mischief in my Kennel →