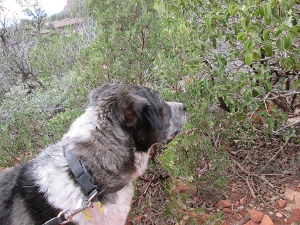 Somebody is trying to take over my trails.

She’s posting herself in a prominent place and making all kinds of noise.

And there’s scurrying in the bushes.

She must be gathering her army around her.

What am I going to do about this?

Spies in the bushes trying to take over my trails.

I wonder what would happen if I plowed into those bushes.

I’m much bigger than that would be trail thief.

I bet I could cause some excitement in those bushes.

But then that army in the bushes might move to my trails and I’d really have problems.

Maybe I should try it anyway.

I’m going in after your army!

18 responses to “The Sentinel”