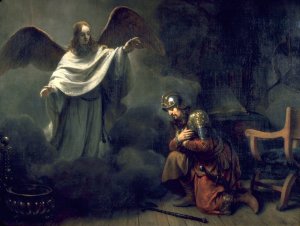 I bet Peter got lots of treats for what he did in last week’s story.

You know, when he raised Dorcas from the dead in Joppa.

He became a celebrity in Joppa after that.

That’s probably why he stayed there for awhile.

I bet everyone liked him so much that they were always giving him treats.

What do you mean, he was being obedient to Jesus and he didn’t care about the treats?

You want me to listen to more of the story?

Do I get treats for listening?

At Caesarea there was a man named Cornelius, a centurion in what was known as the Italian Regiment.

What does Cornelius have to do with Peter?

Cornelius and all his family were devout and God-fearing; he gave generously to those in need and prayed to God regularly.

Did he give Peter treats?

Maybe he’ll give me treats.

One day at about three in the afternoon he had a vision. He distinctly saw an angel of God, who came to him and said, “Cornelius!”

Cornelius stared at him in fear. “What is it, Lord?” he asked.

That angel must not have had any treats with him.

Otherwise he wouldn’t have been scary.

The angel answered, “Your prayers and gifts to the poor have come up as a memorial offering before God. Now send men to Joppa to bring back a man named Simon who is called Peter. He is staying with Simon the tanner, whose house is by the sea.

If Cornelius makes Peter leave Joppa where he’s famous, then won’t Peter be going to a place where he’s not famous?

Who will give him treats then?

When the angel who spoke to him had gone, Cornelius called two of his servants and a devout soldier who was one of his attendants. He told them everything that had happened and sent them to Joppa.

You mean I have to wait until next week’s story to find out if Peter is going to leave all those treats and go with Cornelius’ servants?

That means I still have a week to hang out with Peter and get some of his treats.

7 responses to “Go Get Peter”