I’ve been waiting all week to see if Peter is going to leave all his treats or not.

Those people were about to come and try to take Peter away from where he became famous for raising a lady from the dead.

So what is it?

Will Peter stay, or will he go?

About noon the following day as they were on their journey and approaching the city, Peter went up on the roof to pray.

If he’s up on the roof those people won’t find him and he can stay.

Yes I am listening.

Peter became hungry and wanted something to eat, and while the meal was being prepared he fell into a trance.

You are going to share some of that meal with me aren’t you?

Peter saw heaven opened and something like a large sheet being let down to earth by its four corners. It contained all kinds of four-footed animals, as well as reptiles of the earth and birds of the air. Then a voice told him, “Get up, Peter. Kill and eat.”

I’ve never had food that fresh before.

I’m on my way Peter!

Okay, I’ll listen. This is getting good.

“Surely not, Lord!” Peter replied. “I have never eaten anything impure or unclean.”

The voice spoke to Peter a second time, “Do not call anything impure that God has made clean.”

That stuff’s good to eat.

This happened three times, and immediately the sheet was taken back to heaven.

While Peter was wondering about the meaning of the vision, the men sent by Cornelius found out where Simon’s house was and stopped at the gate. They called out, asking if Simon who was known as Peter was staying there.

Pretend you’re not there Peter.

They’re going to take away all your treats.

While Peter was still thinking about the vision, the Spirit said to him, “Simon, three men are looking for you. So get up and go downstairs. Do not hesitate to go with them, for I have sent them.

I hope the Spirit is going to give Peter some treats then.

Peter went down and said to the men, “I’m the one you are looking for. Why have you come?”

I bet they just want to steal Peter’s treats.

The men replied, “We have come from Cornelius the centurion. He is a righteous and God-fearing man, who is respected by all the Jewish people. A holy angel told him to have you come to his house so that he could hear what you have to say. Then Peter invited the men into the house to be his guests.

Peter, do you still have room for a dog?

I bet Peter got lots of treats for what he did in last week’s story.

You know, when he raised Dorcas from the dead in Joppa.

He became a celebrity in Joppa after that.

That’s probably why he stayed there for awhile.

I bet everyone liked him so much that they were always giving him treats.

What do you mean, he was being obedient to Jesus and he didn’t care about the treats?

You want me to listen to more of the story?

Do I get treats for listening?

At Caesarea there was a man named Cornelius, a centurion in what was known as the Italian Regiment.

What does Cornelius have to do with Peter?

Cornelius and all his family were devout and God-fearing; he gave generously to those in need and prayed to God regularly.

Did he give Peter treats?

Maybe he’ll give me treats.

One day at about three in the afternoon he had a vision. He distinctly saw an angel of God, who came to him and said, “Cornelius!”

Cornelius stared at him in fear. “What is it, Lord?” he asked.

That angel must not have had any treats with him.

Otherwise he wouldn’t have been scary.

The angel answered, “Your prayers and gifts to the poor have come up as a memorial offering before God. Now send men to Joppa to bring back a man named Simon who is called Peter. He is staying with Simon the tanner, whose house is by the sea.

If Cornelius makes Peter leave Joppa where he’s famous, then won’t Peter be going to a place where he’s not famous?

Who will give him treats then?

When the angel who spoke to him had gone, Cornelius called two of his servants and a devout soldier who was one of his attendants. He told them everything that had happened and sent them to Joppa.

You mean I have to wait until next week’s story to find out if Peter is going to leave all those treats and go with Cornelius’ servants?

That means I still have a week to hang out with Peter and get some of his treats. 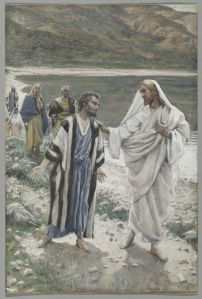 Last week there were so many fish in that Bible story.

Can we just do that story again this week?

What do you mean, I can go back and read it.

It’s not the same as hearing it.

Besides, I can’t read.

Oh alright, I’ll listen to the next story.

When they had finished eating, Jesus said to Simon Peter, “Simon son of John, do you truly love me more than these?”

I bet he really does love Jesus after Jesus helped him catch all that fish.

Well, is there a better reason to love someone besides food?

I’ll feed Jesus’ lambs if He helps me catch fish.

Again Jesus said, “Simon son of John, do you truly love me?”

He answered, “Yes, Lord, you know that I love you.”

The third time He said to him, “Simon son of John, do you love me?”

Peter was hurt because Jesus asked him the third time, “Do you love me?” He said, “Lord, you know all things; you know that I love you.”

I think I’d better get my herding type friends to help Peter.

Jesus said to Peter, “I tell you the truth, when you were younger you dressed yourself and went where you wanted; but when you are old you will stretch out your hands, and someone else will dress you and lead you where you do not want to go.”

I guess it’s a good thing I don’t have hands.

Nobody can stretch mine out.

Jesus said this to indicate the kind of death by which Peter would glorify God. Then He said to him, “Follow me!”

I have to think about this.

Peter turned and saw that the disciple whom Jesus loved was following them. (This was the one who had leaned back against Jesus at the supper and had said, “Lord, who is going to betray you?”) When Peter saw him, he asked, “Lord, what about him?”

I guess Peter was thinking about it too.

Jesus answered, “If I want him to remain alive until I return, what is that to you? You must follow me.”

I guess that says that.

Because of this, the rumor spread among the brothers that this disciple would not die. But Jesus did not say that he would not die; he only said, “If I want him to remain alive until I return, what is that to you?”

I don’t think that guy’s dead yet.

I wonder if he has any fish left.

I think I’ll go look for him.

Peeking into the Tomb

Person, I’ve been waiting all week because you told me there’s more to the story.

But I don’t know how there can be.

I mean, they nailed Jesus to a cross and He died.

Isn’t that the end of the story?

I’m listening, but I don’t think you’ll have anything to say.

Early on the first day of the week, while it was still dark, Mary Magdalene went to the tomb and saw that the stone had been removed from the entrance.

I have to have patience???

So she came running to Simon Peter and the other disciple, the one Jesus loved, and said, “They have taken the Lord out of the tomb, and we don’t know where they have put him!”

Why would anyone want to take Jesus if He already died?

I bet I could have run faster.

He bent over and looked in at the strips of linen lying there but did not go in. Then Simon Peter, who was behind him, arrived and went into the tomb. He saw the strips of linen lying there, as well as the burial cloth that had been around Jesus’ head. The cloth was folded up by itself, separate from the linen. Finally the other disciple, who had reached the tomb first, also went inside.

He saw and believed. (They still did not understand from Scripture that Jesus had to rise from the dead.)

Jesus had to what!?

I’m listening for sure now.

Then the disciples went back to their homes, but Mary stood outside the tomb crying.

Maybe if I gave her some loves she’d feel better.

As Mary wept, she bent over to look into the tomb and saw two angels in white, seated where Jesus’ body had been, one at the head and the other at the foot.

This story isn’t about Jesus. It’s about angels showing up instead.

The angels asked Mary, “Woman, why are you crying?”

“They have taken my Lord away,” she said, “and I don’t know where they have put him.” At this she turned and saw Jesus standing there, but she did not realize that it was Jesus.

I would have known it was Jesus.

“Woman,” Jesus said, “why are you crying? Who is it you are looking for?”

Thinking He was the gardener she said, “Sir, if you have carried Him away, tell me where you have put Him, and I will get Him.”

She turned toward Him and cried out in Aramaic, “Rabboni!” (which means teacher).

Maybe Mary Magdalene was blind. She only recognized Jesus when she heard Him say her name.

Jesus said, “Do not hold on to me, for I have not yet returned to the Father. Go instead to my brothers and tell them, I am returning to my Father and your Father, to my God and your God.”

Mary Magdalene went to the disciples with the news: “I have seen the Lord!” And she told them that He had said these things to her.

I don’t care what Jesus said. I wouldn’t have let go of him.

I would have attached Him to my leash or something so He couldn’t go missing again.