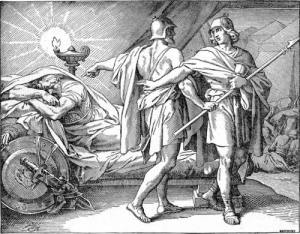 I don’t believe it. King Saul went after David with 3000 men and David only had 600 men? I sure hope David had some dogs to help him out too. My dog buddies would give King Saul what for.

What do you mean, that’s not part of the story? I think dogs should be in the story.

David found out where King Saul had camped and he went there and saw where Saul and Abner, the commander of the army, had lain down. Saul was inside the camp with his army around him, and he had stuck his spear in the ground near his head.

I could be quiet enough. I could. What if someone woke up while David was sneaking in?

See? If the Lord put everyone in a deep sleep they wouldn’t wake up for me either.

Okay, I’ll go back to the story.

Abishai wanted to kill King Saul with his spear but David wouldn’t let him because King Saul was the Lord’s anointed. So what did David do? He took King Saul’s spear and water jug and they left.

Come on David, you’ve got to stir up more mischief than that. That would hardly count for a Monday Mischief Blog Hop.

So David did what next? He did?

David went up on a hill a ways away and yelled at King Saul and Abner and told them what he’d done.

Is that it, person? When is God going to give King Saul what for?

Really? My person says that eventually King Saul died in battle and David got to be king, but David still kept having adventures after that.

I wish I could be David’s dog. I like having adventures.

No person, I’m happy being your dog, but your adventures are mild compared to David’s. After all, I am Super Dog. 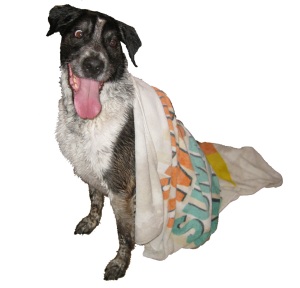 22 responses to “Sneaking Up”