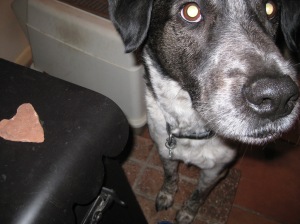 My person and I met this man on my trails and he stopped and gave me loves. Some people give me loves, but most of them just walk by. Sometimes they say something to me, but a lot of them ignore me. It’s really disappointing, but that makes it special when I do get loves.

This man talked to my person for a couple minutes – general stuff like how nice a day it was. Well of course it was a nice day. Anytime I get loves it’s a nice day.

We were about to go on when the man reached into his pocket and handed something to my person.

And then I realized who he was.

We don’t see him often. We’ve only seen him twice before. But whenever we see him he gives my person a little red rock shaped like a heart.

I think it’s pretty cool that he does that – and especially cool that he gives me loves. But I think there’s one more thing he needs to do.

I wonder if he could get some heart shaped treats to hand out to dogs.

38 responses to “The Heart Man”