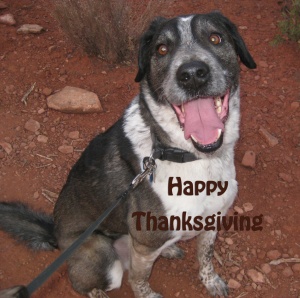 Today is Thanksgiving here in the United States. It’s a pretty cool day because everybody eats turkey and I like turkey.

But what I want to know is what everybody is thankful for?

I think that was a long time ago. Was I around then?

I wasn’t? I bet my person was around then though.

Oh. You were born a little bit later than that? How much later?

I am listening to the story.

A Native American named Squanto was especially helpful to the pilgrims. He was from the Patuxet tribe and had been captured by a ship that had come near his village. He lived for awhile in England and learned English and was eventually allowed to come back home.

Squanto came back home to find his entire village had been wiped out by a plague. A short time later pilgrims came and settled in Plymouth, which had been the location of Squanto’s village.

Squanto taught the pilgrims how to farm and how to find food.

Did he teach them how to make treats for their dogs?

The pilgrims were so thankful to Squanto and the other Native Americans that had helped them survive that they held a big feast in the fall and invited many of the Native Americans to join them. The feast lasted for three days and even if the dogs just got the scraps they were doing good. There was a lot of good food there.

What do you mean this is supposed to be the history of Thanksgiving? Thanksgiving is all about food, isn’t it?

Okay, one more tidbit – of turkey, that is.

Thanksgiving wasn’t celebrated every year at first, but in 1863 President Lincoln proclaimed the last Thursday in November to be a national day of Thanksgiving.

Hooray for President Lincoln! I’m for sure voting for him next election.

← The Sunny Spot
Where’s My Turkey? →

38 responses to “Thankful for Turkey Treats”