RSS
← Get that Shirt
A Hole in the Roof →

It’s been a long time since I’ve put on my Detective Dog hat, but it’s time to do it.

You see, there have been some litter bugs on my trails lately and they’re dropping strange things.

Most of the time these strange things are only a few yards from the trailhead where the garbage can is. Which means that there is a serious problem with lazy litterbugs on my trails.

But I guess I understand why no one wants to put them in their pocket when they’re through with them.

They stink really bad. So bad that I won’t go near them with my nose. Which makes it really hard to do an investigation.

How can I investigate if I can’t sniff around?

So why would anybody want these stinky things in the first place?

Anything that’s too stinky to stick in your pocket is definitely too stinky to carry around with you. People should leave them at home, or the store, or wherever it is that they got them.

That would solve two problems. No litter and no stink.

But maybe that’s not such a good idea after all. Because if those things weren’t here then I wouldn’t have anything to investigate.

And that would put Detective Dog out of a job. 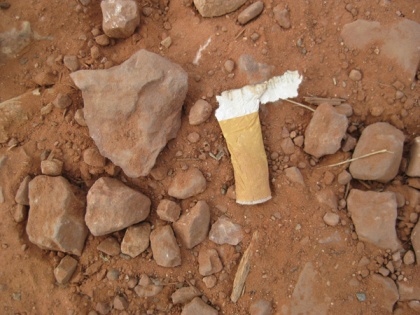 ← Get that Shirt
A Hole in the Roof →