Last year there were tons of little hedgehog cacti blooming on my trails. This year they are blooming again, but not as many.

Maybe that’s why they seem to be hiding themselves. They must think they need protection, and since there’s no protection in numbers they’re looking for other ways.

Check out this one that I’m trying to get at.

It’s hiding under a catclaw bush. There’s a reason these bushes are called what they’re called.

But if I can brave Scratchy’s claws I can brave anything. This bush ain’t got nothing on me.

This one really tucked itself away. If it hadn’t been for its bright color we never would have seen it.

My person will crawl under anything for a good picture. It’s a good thing that bush didn’t have pricklers. I would have had to take the tweezers to her when we got home.

It seems that all the cacti are hiding under bushes.

I think my person was brushing dirt off her knees after taking this picture. 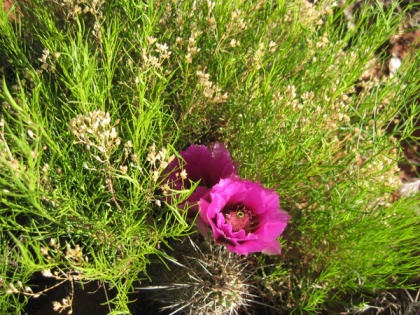 This cactus used a different approach. Instead of blooming under a bush it decided to bloom in a bush.

But this next cactus is very brave indeed.

Standing right out in the open and holding up an offering.