RSS
← Something to Say
I Like the Old One → 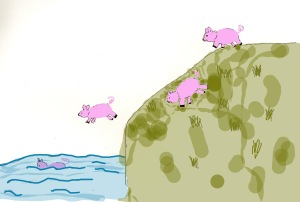 What do you mean, I’m making that part up?

I know it doesn’t say anything in that part of the Bible about anybody eating fish, but you know they must have.

You can believe what you want. I prefer to believe that they ate fish – and invited me to the feast.

After Jesus calmed the storm they sailed to the other side of the Sea of Galilee, to the region of the Gerasenes.

And this dude came out to meet Jesus.

Didn’t lots of people come out to meet Jesus?

This dude had an evil spirit and lived in the tombs. He had often been chained hand and foot but he broke the chains and no one was strong enough to subdue him. He would cry out night and day and cut himself with stones.

Wow, that’s some scary dude. If I was Jesus I’d run back to the boat and head back home.

He stayed there? Did he have his tail between his legs?

The man ran to Jesus and fell on his knees in front of him. He shouted at the top of his voice, “What do you want with me, Jesus, Son of the Most High God? I beg you, don’t torture me!” For Jesus had commanded the evil spirit to come out of the man.

Jesus asked the man his name and the man said Legion, because many demons had gone into him.

That would be pretty squishy for all those demons to fit inside one man. I wonder how they got along with each other.

I’m listening, but I’ve got to make comments sometimes.

What a waste of a lot of good bacon.

I can swim. Could I go retrieve some pigs?

The people tending the pigs ran off to report what had happened and people came to see what was going on. When the people came to meet Jesus they found the man who had been possessed by demons sitting there, dressed and in his right mind.

The people asked Jesus to leave because they were afraid.

The man Jesus had cured begged to go with him, but Jesus told him to return home and tell how much God had done for him. So that’s what the man did, and all the people were amazed.

You’re not done with the story are you?

What about those pigs?