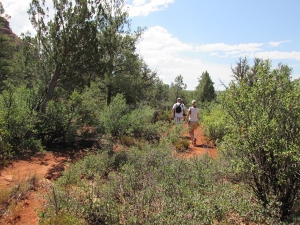 I think it’s pretty hard to get lost on my trails – even when I go outside of my usual rounds, but of course it’s pretty easy to follow the smells.

My person thinks the trails are hard to get lost on too, but she uses a different method to find her way.

She’s taller than me so she can see further. She says there are lots of landmarks to find your way by.

It’s also hard to go very far without running into either houses or something that falls between a very large rock and a very small mountain.

I can’t read them so I have to trust my person when she says those tall poles sticking out of the ground hold signs that point out the trails.

I thought they were put there so dogs could leave messages for each other. At least that’s what we use them for.

Even with all these ways to navigate (Person, navigate is too big a word for me.) the trails, my trails can be really tricky for new people. There are little loops that go off and come back to the main trail. Maybe they were put there on purpose so people would go in circles and not be able to find their car again. Then the trail loop car collectors could take their pick of the cars that were left.

Those car collectors probably don’t like my person much though. When she’s asked, she tells those lost people how to get out of the loop.

I think my person’s pretty cool though. Today I got loves from some people she was helping.

Those people were really lost. They were trying to find a place called Wisconsin.