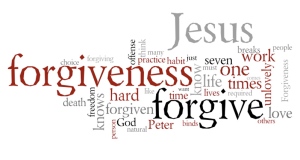 I hope this week’s Bible story isn’t as confusing as the last one. I wasn’t sure if you were talking about sheep or puppies.

Peter came to Jesus and asked, “Lord, how many times shall I forgive my brother when he sins against me? Up to seven times?”

Jesus answered, “I tell you, not seven times, but seventy times seven times.”

Are you serious? Does that mean I have to forgive you person, for all the times you pull mischief on me?

Of course I’m listening. I’m just trying to multiply that number. You never taught me how to do that. More mischief.

Then Jesus told a story. He said, “The kingdom of heaven is like a king who wanted to settle accounts with his servants. As he began the settlement, a man who owed him ten thousand talents was brought to him.

That man must have been really talented.

How much is ten thousand talents?

Millions of dollars? No way! I think that king should have cut him off a long time ago.

Since the man was not able to pay, the master ordered that he and his wife and his children and all that he had be sold to repay the debt.

The servant fell on his knees before him. “Be patient with me,” he begged, “and I will pay back everything.” The servant’s master took pity on him, canceled the debt and let him go..

Whew! He was lucky.

But when the servant went out, he found one of his fellow servants who owed him a hundred denarii. He grabbed him and began to choke him. “Pay back what you owe me!” he demanded.

I guess a hundred denarii must be way more than ten thousand talents.

What!? It’s only worth about a day’s wages? I guess that guy was pretty demanding.

The fellow servant, the one being choked, fell to his knees and begged him, “Be patient with me, and I will pay you back.”

But the first servant refused. Instead, he went off and had the man thrown into prison until he could pay the debt.

Well, that doesn’t make any sense. How can you pay a debt when you’re in prison?

Then the master called the servant in. “You wicked servant,” he said. “I canceled all that debt of yours because you begged me to. Shouldn’t you have had mercy on your fellow servant just as I had on you?” In anger his master turned him over to the jailors to be tortured, until he should pay back all he owed.

Then Jesus said, “This is how my heavenly Father will treat each of you unless you forgive your brother from your heart.”

Person, I forgive you seventy times seven times for all the mischief you ever did to me.

But if you pull mischief on me again, you’d better watch out.