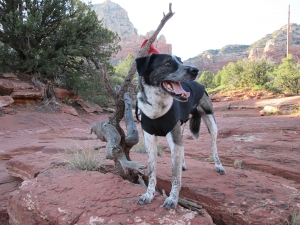 If you’ve been following along on my blog the last few weeks you know that I found tadpoles in my puddle and then those tadpoles turned into little toadies.

And then somebody took my puddle.

But those toadies still hung around where my puddle used to be.

Every day when I’d go by there I’d see lots of little toadies hopping around where my puddle had been, but I never saw any toadies anywhere else on my trails.

Today, all that changed.

You see that area behind me?

Oops, I guess I’m blocking it. 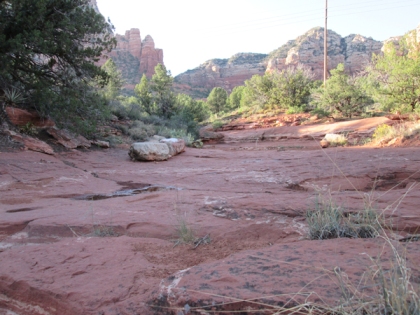 My person is standing near my puddle taking the picture

Today I found toadies almost to the end of that red rock clearing.

But then those toadies got stuck. They came across a humongous cliff.

No, not that thing way in the back of the picture. What the toadies found doesn’t look like much, but to them it’s enormous.

Check out these guys – if you can find them. They kind of blend in.

One of these toadies is bravely making the ascent, but the other one looks stuck. 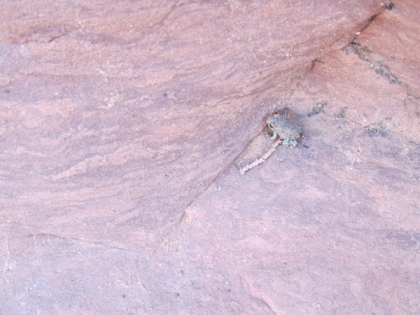 This one looks stuck too.

Right at the bottom of the cliff. 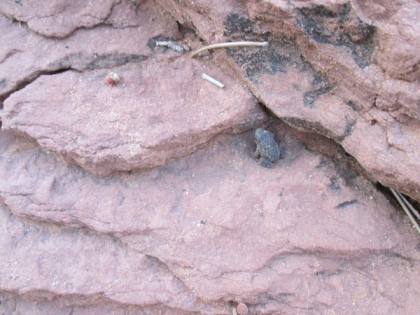 This toadie might be a little smarter than the rest. It found stepping stones.

But check these next toadies out. 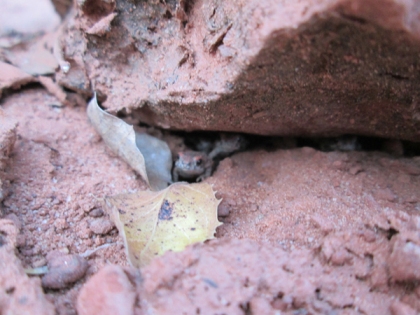 Only one toadie really shows up in the picture, but believe me there are more toadies behind that one.

These toadies came to the cliff, decided it wasn’t worth climbing, and found a hideaway instead – right at the bottom of the cliff.

I tried to decide which was better – climbing the cliff to places unknown or hiding out at home with a bunch of buddies.

I guess some dogs will choose the cliff and some the hideout. We’re all different, just like those toadies.

But for me it didn’t take long to decide.

I started thinking what my blog would be like if I stayed in my hideout all the time.

It would be pretty boring.

So for me, it’s up that cliff – and off to adventure.

Do I need to get a new hat?