Left Out of the Adventure 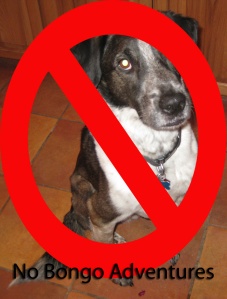 My people went on an adventure last night and didn’t invite me – the dog who lives for adventures. I’m not even sure what kind of adventure they went on. A treasure hunt maybe?

Here’s what happened. My younger person left kind of late last night and said he was going back to that college place. I think maybe he said that so I wouldn’t try to go with him.

My person and I went into her bedroom and she turned out the lights. So far, so good. This happens almost every night around here.

But then you know what she did? She talked to that thing again and left the house and drove off in her car. And she didn’t take me!

Just me and Scratchy alone in the house – in the dark. This is not right.

My person was gone for a long time and it was starting to get light when I heard her car. I know she was on an adventure because she brought my younger person back with her. This college place he keeps talking about must be all made up.

My younger person slept for awhile and then left again in his little car. He must have lost the other one on the adventure. He’s still insisting that he’s going to that made up college place.

If my person talks to that thing again tonight, I’m blocking the door so she can’t get out without taking me with her. I’ve got to make sure they don’t lose another car in that black hole they call the college place.

44 responses to “Left Out of the Adventure”