I’m working on another mystery, and as usual, this one has to do with my trails. You see, a couple of days ago my person and I were trekking through a part of my trails that we don’t usually go on, and we saw something strange.

That wouldn’t be so unusual in itself, except that it isn’t flower season anymore. Of course my person had to stop and take pictures of them. At least there were some weeds to munch on next to the flowers. Otherwise I would have been upset about having to wait while my person took pictures – again.

But I’m still working on that mystery. Why were those flowers there at the wrong time of year? There’s something really suspicious going on here.

Wait! Something’s coming to me. When we saw those flowers, weren’t we on our way to see the artists who were painting on my trails?

That’s why we saw those flowers – because we went a different way so we could get to where they were.

And what were those long sticks called that those artists were using?

And what are those flowers called? 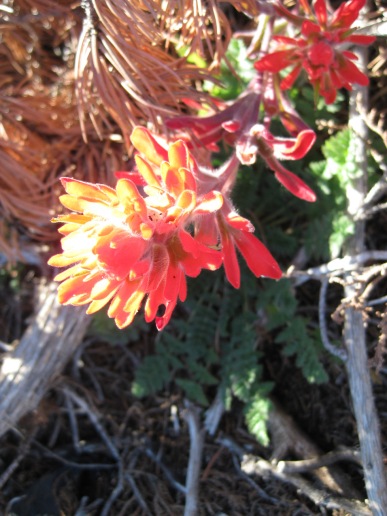 I’ve got it! I’ve solved the mystery.

Those artists left those flowers there. They were painting pictures of red rocks and I bet that since they were in Sedona they wanted to use Sedona paintbrushes. But then when they got all the red paint they needed, they left those Indian paintbrushes in the ground.