Boy did I have a good Christmas this year. Look at this! I even got Bongo Ties. Who would have thought someone would make something special just for me. I’m not sure what I’m supposed to do with these Bongo ties – I think it might have something to do with tying up Scratchy – but that’s a whole other story.

But while I was still pondering (I was what?) what to do with those Bongo ties my person opened another present for me. She says she used to have a dog that opened his own presents, but I figure I’m paying her all those big bucks to be my secretary so she can open my presents too.

And speaking of big bucks… 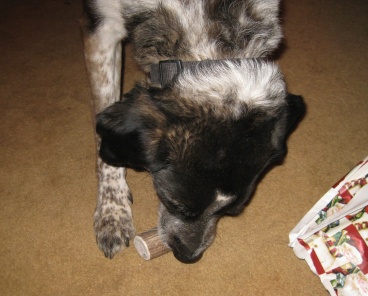 I got an antler! I really needed this because I finished off my last antler awhile back.

I got some other toys too – including a squeaky squirrel.

Take that, you pesky squeaky squirrel!

Scratchy must have thought that he didn’t get enough presents…

because I caught him searching through the torn paper for more. (I did get more presents than Scratchy, but don’t tell him.)

a ball showed up. Woo woo!

I hope all of you had a great Christmas too.

39 responses to “Bongo Ties for Christmas”