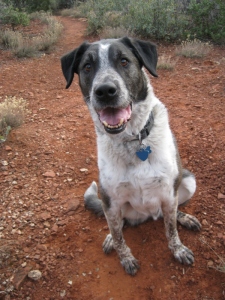 This is terrible – really terrible! You see, my person was going over the annual report for my blog and not one of the top five posts was about me. Well, I guess one of them was – the last one.

The top post was one I wrote way back in October of 2011 – Adventures of a Dead Mouse. It wasn’t even about a dog. And the mouse wasn’t even alive. And all because my person wouldn’t take a picture of the mouse. So I made her draw one for my blog post. You wouldn’t believe how many people found this blog post through searches for a dead mouse.

My person noticed that a lot of people were also finding my blog with the search “Bongo Cat” and they were finding pictures of Scratchy – the cat I live with. So she made me write a post called Bongo Cat. And it became the second most popular post for 2012. Do you believe it? A mouse and a cat beat me.

When my person noticed all the searches that were finding the dead mouse drawing I started a Dead Mouse Fan Club. And that became the third most popular post for 2012. I’ve been beaten out by a cat and twice by a mouse.

Then my person seemed to be confusing me with a wolf and she drew a picture of a wolf howling. And Howling Like a Wolf became my fourth most popular post. At least a wolf is related to me. I don’t feel quite so bad about that one.

At least the fifth most popular post is about me. It’s the poem I wrote for my Gotcha Day. So I think I learned something from this. If I want lots of people to read posts about me I have to write more poetry, celebrate my Gotcha Day every day, or get my person to start drawing pictures of me.

But here’s what I really wanted to tell you about. There are some special people and dogs who read my blog and comment regularly. So I want to let you know which of my friends gave me the most comments in 2012, because all of them are really awesome.

There was a tie for first place: Marina is a wonderful artist who also loves dogs, and Kevin is a Shiba-Inu who lives in Japan.

Third place goes to Angels Whisper and I have to admit I’m kind of partial to her cat Little Binky. I think Little Binky is probably nicer than Scratchy.

Fourth place goes to all my collie friends at Collies of the Meadow. One of the collies, Ginger, gives me all kinds of great mischief ideas.

And number five goes to my buddy Jet. His mom’s been busy like my person has, so that was a lot of comments he gave me awhile back. I’ve been missing him lately, but I understand.

I’ve got a special treat for all of my top five commenters. The first one is for the people who commented. I would like to share these treats with my dog friends too, but my person says we’re not allowed to eat chocolate.

So I added some dog treats. Make sure your people don’t eat any of these. They get the cookies.

I know there’s a few cats involved too. I had to ask Scratchy what cats would like. He said a mouse. I was going to refer all the cats to that dead mouse, but Scratchy donated one of his.

I want to thank everybody that has been reading my blog and leaving me comments. You are all special to me and when my person gives me some more treats I’ll share them with you too.

41 responses to “Top Reads and Writes”