RSS
← Helping with Handouts
Get that Shirt → 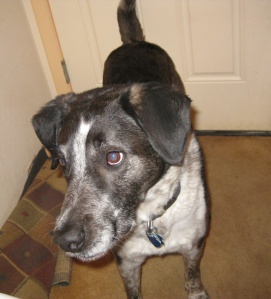 Well, unless Scratchy starts acting up.

I think he may have been acting up because lately, whenever my person and I go out the front door a bird or two quickly flies away.

This has never happened before – at least not on a regular basis. We have big trees in our yard and the birds that hang out in them are usually not bothered when we leave the house. They’re so much higher than us that they know they’re safe.

That’s why I’m thinking that Scratchy may be working on some kind of trap for those birds. I’d better keep an eye on him when I leave the house. I think he may be trying to sneak out with me, hoping that the birds won’t notice.

Scratchy! You leave those birds alone.

I was ready to give Scratchy what for when my person noticed something. She said we had some new neighbors.

And then she said they might even be planning to raise a family nearby.

I’m not sure what my person is talking about, but I sure hope if they have little ones that they’re puppies. Puppies would play with me. But I hope the little ones aren’t kittens. Scratchy would probably teach them to go after those birds.

What, person? What baby birds? I haven’t seen any baby birds around here.

Oh that? That’s what that is? The birds’ built a nest on our rafter?

I just thought somebody was stuffing their spare straw up there.

← Helping with Handouts
Get that Shirt →