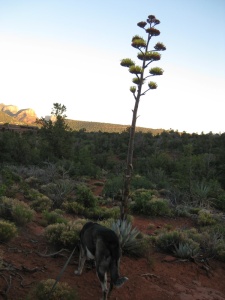 My person and I went out on an extra long walk. A century plant trek.

We started out on the trail where most of the century plants were last year. We figured we’d find lots of them. Well, my person figured. I was just happy for the walk.

We found some century plants.

The old dead ones from last year.

But there were only a couple new century plants on this whole trail, and they weren’t even in full bloom yet.

So we headed back. The trail is a loop so we kept looking for century plants on the way back.

And then we found it. 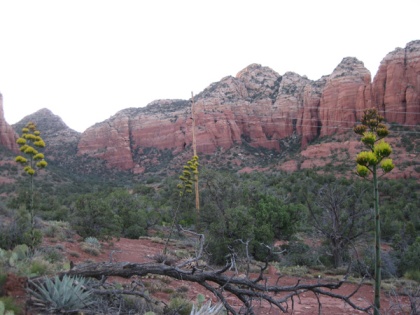 There were lots of century plants on this hill. Last year there were only two.

If you look really close you can even see the bugs flying around the flowers.

Speaking of bugs, they were everywhere. Especially on my person because she doesn’t have lots of hair to protect her like I do. Those little “no see ‘ems” that come out this time of year were all over her arms.

So we headed back home.

But my person still couldn’t stop taking pictures, even though the bugs were worse around the plants.

I thought maybe if I turned the color off…

the bugs would go away. But they didn’t…

so I turned the color back on again.

One last look at Century Plant Hill and we headed home.

Come on, person. I said we were heading home. I don’t care if there’s a bird in that plant. You have to look really close to see it.

Well, if you’re going to stop and take pictures of birds, then you’d better show the picture of me…

and the new friend I made on the way to Century Plant Hill.

This part was way more fun than looking for century plants.

← Posted Under Duress
What’s that Smell? →

28 responses to “Searching for Century Plants”